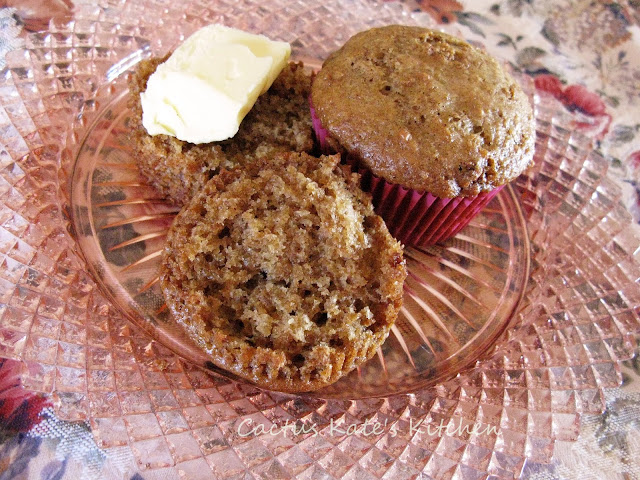 Now here's something I don't think you see too much anymore--six-week refrigerator bran muffins.

And that's a shame really.  Granted the recipe makes a huge amount; you will definitely have to find your very biggest bowl to mix it and a good amount of space in your fridge to store it (at least in the beginning), but the convenience and specialness of homemade, hot raisin and bran muffins with melted butter is something you just can't buy at your local coffee shop.

Perhaps it's me because I'm getting older, but I value those quiet moments at home, not standing in line with twenty-five other non-morning, likely grumpy people, grins.  And if you're in that morning grump slump, we all know how annoying it can be to have that little bluebird of happiness just chirping merrily away.  So much better to be at home, get one's footing, and then go out and face the world.  These will help.

Mix cereal with raisins, sugar, flour, soda and salt in a very large bowl. Add oil, eggs and milk. Allow to rest before use.  Fill muffin tins 2/3 full and bake at 400 degrees for 18-20 minutes.

Store in a covered container and use as needed.

COOK'S NOTE:  Yep, this does in fact last six weeks.  I stirred the batter off and on in between, sniffing to make sure that it was still okay.  I could make six muffins or a dozen, whatever time and appetite allowed. 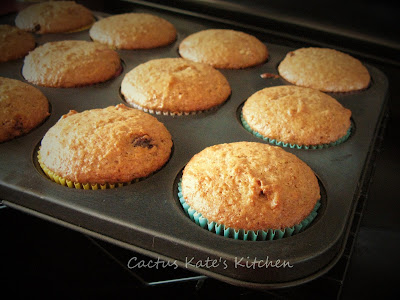 There's Nothing Like Corn, Corn, Cornmeal Pancakes in the Morning 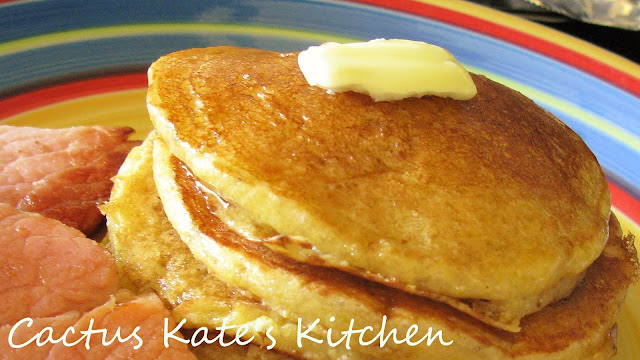 I'm still kind of laughing about this.  Sweetie Pie, who is the meat eater in this household, put back his ham steak to grab some more cornmeal pancakes.  Just when you think you've seen it all and miracles never happen on a Sunday morning, this happens.

We love pancakes and eat a lot of them for weekend breakfasts.  I've shared my favorite pancake recipe here.  Sweetie Pie grew up with cornmeal pancakes; I had never heard of them until I met him. I've made cornmeal pancakes in the past, usually they included a can of corn, but I'm thinking this my new favorite recipe and will be retiring the other.

In a large measuring cup beat together the eggs, buttermilk, honey and butter.  Add to the cornmeal mixture and stir but do not overmix.

Heat a griddle or large cast iron skillet over medium.  Give a light coating of cooking spray or oil.  Ladle 2 tablespoons of batter for each pancake, gently swirling the batter to make into a nice circle.

Fry until bubbles appear, about 2 to 3 minutes each side.  You're probably going to make this in batches so have a baking sheet on standby and oven preheated at lowest possible temperature, to transfer the pancakes to while preparing the rest of them.

COOK'S NOTES:  I used an electric fry pan, set it at 350 degrees Fahrenheit, and I found it cooked them too fast on the outside.  I reduced the heat to 325 degrees Fahrenheit and wiped out some of the oil, and they came out much nicer.  I use a little stainless steel gravy ladle to scoop out the batter, pouring it into a circle and using the side of the ladle to even out the edges and thickness. 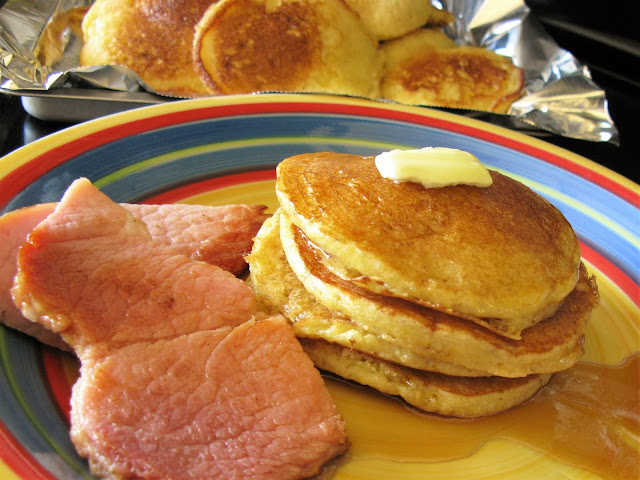 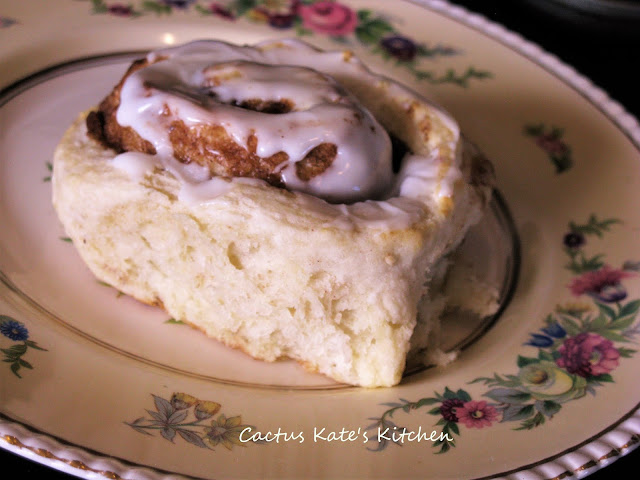 Oooh boy!  If you like cinnamon rolls for breakfast, fresh and hot from the oven but you don't like working with yeast or don't have the time to wait for rollin' and risin', then I hope you give this recipe a try.  Have mercy, these were a winner.

I had another recipe for biscuit cinnamon rolls, and it was just like it sounds, biscuits with cinnamon.  Not horrible mind you, but clearly deserving of their biscuit claim, and they were not something I rushed to make again.

So I saw this recipe, hemmed and hawed, reflecting on my past experience, and passed over it several times.  Don't ask me what drew me to it--probably the buttermilk that needed using and the fact that we love pastry type items for our weekend breakfasts. And I don't discount the fact that I have been a huge fan of Mel's Kitchen Cafe for years and years.  She is totally amazing!

And may I say these far exceeded expectations.  While not as light and fluffy as a yeast roll, these were amazing on their own.  Definitely fluffy and tender and full of cinnamon deliciousness.  And huge.  The original recipe said serves 12 to 15.  I am not advocate of puny cinnamon rolls so I made 12.  Just let me say a single roll would easily be more than enough for someone who was wasn't a part of the super-size crowd.  Ahem.  Both Sweetie-Pie and I had two.  What can I say; that's the way we roll.

For the Vanilla Glaze:
Stir the ingredients together, adding extra liquid or confectioners' sugar to adjust the consistency as needed. Yield: about 1/2 cup glaze.  This made just about enough to lightly glaze all the biscuit rolls.  If you lot a lot of glaze, consider doubling the recipe. 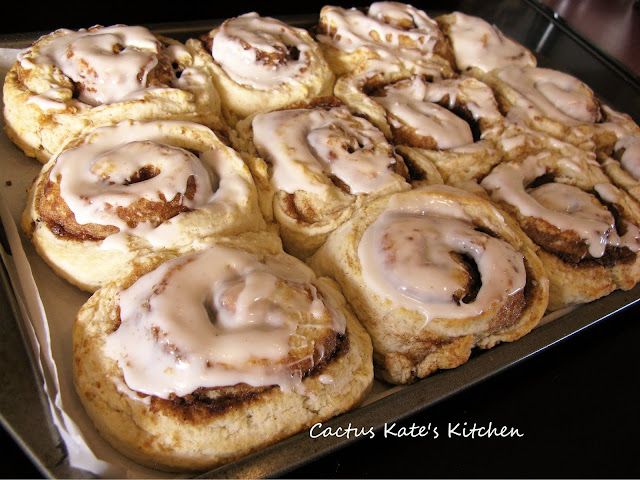 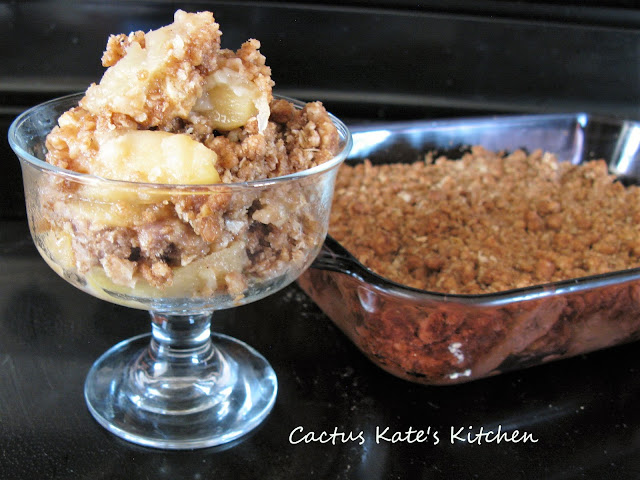 Apple crisp has been one of my desserts of choice since I first had its cinnamon-y, brown sugary, apple-y goodness as a dessert in our elementary school cafeteria.  The lunch ladies knew how to scoop it up and serve mounds of sweet deliciousness in those brown speckled melamine bowls I'll always remember.

Even as an adult dining out at restaurants, if apple crisp was on the menu, apple crisp was my dessert.  Oh, and strawberry shortcake.  If both were offered, I might forgo dinner for two desserts.  That's how much I love them.

Funny thing about apple crisp, though.  Just a few ingredients but not everyone gets it right.  I mean it has to have oatmeal in it. That's what makes it crispy.   Don't be messing me about with lumps of flour.  And it has to have brown sugar.  Simple rules, but when followed, simply divine.  One could eat this with a side of melting vanilla ice cream or mountains of whipped cream, but I am a purist.  Just a spoon and a generous portion of apple crisp and you won't hear a word from me.  Is mmm-mmm a word?

1 teaspoon cinnamon
4-6 apples or even a couple more

Peel and slice apples as you would for an apple pie and spread evenly in baking dish.

Combine the other ingredients, but leave the mixture crumbly. Sprinkle over the apples.

Bake at 350F for about 35 minutes or until a knife easily pierces the cooked apple. Can be served hot with ice cream. Equally delicious cold.

COOK'S NOTES:  Truth be told, I use 6 to 8 apples as I like a lot of apples. Also, I use a mix of apples, Macintosh and Granny Smith as a rule.  Since moving to Arizona, the Macintosh isn't readily available, so I switched to Crispin I think they're called.  I use an 8" x 8" pan because I like the look of abundance in the pan and consequently in the dessert dish, grins.
Posted by Katy at 3:28 PM No comments:

Katy
An old fashioned lady from the winding roads and rising mountains of New England now in the the golden deserts of the America's Southwest, breathless and awed as another adventure unfolds.